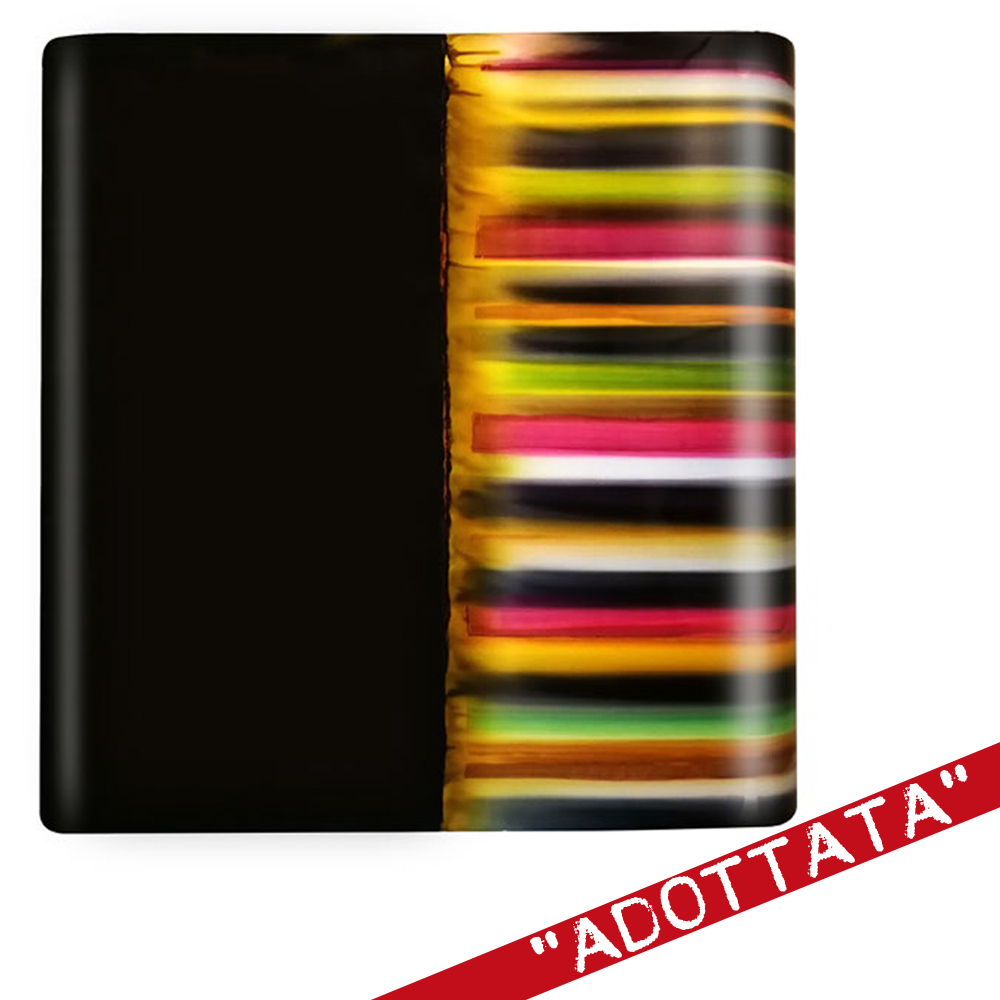 Giovanni Lombardini was born in 1950 in Coriano di Rimini, where he lives and works. He completed his studies at the Academy of Fine Arts in Urbino for which in 1972 his work ‘Shoes with grass’ became the main image. The scenic prowess of matter and objects led his research in the 70s on admittedly poor art paths. From the first works with grass, to soap writings, to large coloured canvases with rubbed petals, the reflection on the primacy of natural phenomena and on the phenomenal structure of sensory behaviours is strong.

Since the 80s, his research has aimed to focus on more technological materials: shiny and non-absorbent surfaces, manual shapes and moulds of objects and people made with painted foil, castings of copper and bronze paint on virgin radiographic plates and mergers of cast iron and soap. Even the most recent works are therefore born from the discovery and experimental use of unusual materials: mordant colours and transparent glossy acrylic applied on table or on paper, but always with a particular love for colour and its interaction with light.

Among the most recent exhibitions we mention in 2004 the personal ‘Methamorfosis’ at Barbara Behan Contemporary Art, London; in 2007 at the Gallery 705 in Stroudsburg in Pennsylvania U.S.A. and gradually, over the years, the personal exhibitions by Zaion, Biella; PoliArt, Milano; PaciArte, Brescia; Studio Maab, Milano. In 2014 he is very busy at the Southwest Minnesota State University Art Museum in the United States and with the anthology ‘The Initials’, Palazzo Ducale.

In 2015 he takes part in ‘Art Loft’, a personal exhibition at the K35 Art Gallery, Moscow; he has a collaboration with ‘Pitti Immagine’, Fortezza da Basso, Firenze and exhibites at ‘Messaggi’ at the Galleria d’Arte Moderna e Contemporanea, Villa Franceschi e Villa Mussolini, Riccione. In 2018 he is in a solo show with Edward Evans from Augeo Art Space, Rimini in ‘La pelle del colore’. In 2019 he exhibits for the personal ‘The Ring of Rhymes’ at the PoliArt Contemporary in Milano and is among the main protagonists at the Lucio Fontana’s Archaeological Museum in Aosta in ‘La sua lunga ombra, quelle tracce non cancellate’, an exhibition promoted by the Valle D’Aosta Region; curators, Giovanni Granzotto and Leonardo Conti.