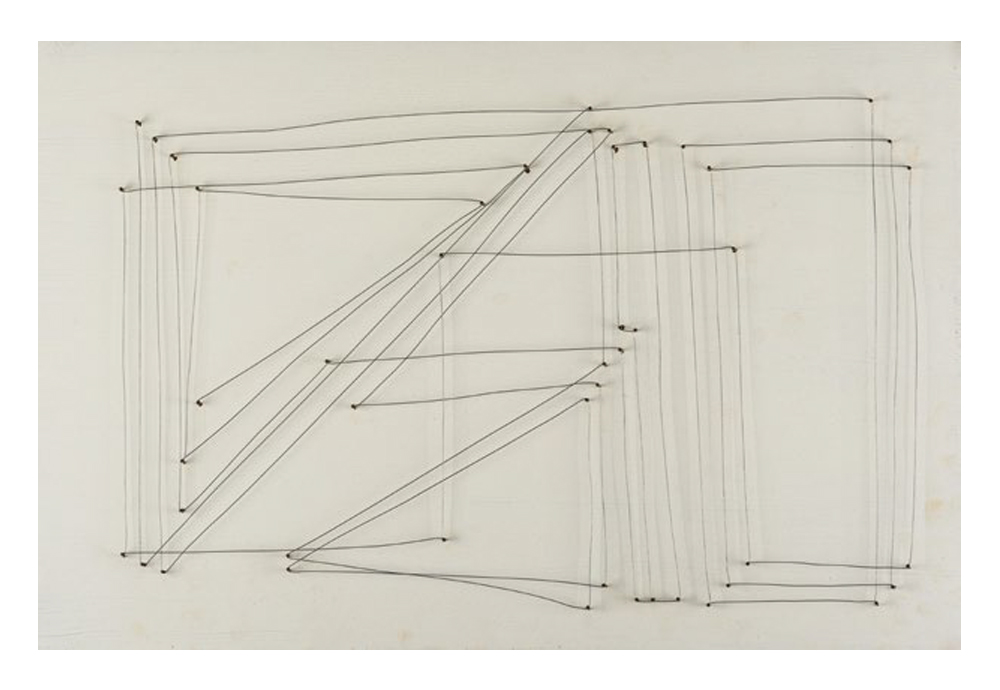 Ezio Bruno Caraceni (Chioggia, 1927–1986). Art critic Lionello Venturi is considering him as one of the most interesting artists of his generation. As a matter of fact, he was highly appreciated by art critics of his time such as Maurizio Calvesi (curator of his exhibitions at the Il Cavallino gallery in Venice in 1960 and 1968), Maurizio Fagiolo dell’Arco, Emilio Villa, Bruno Munari, Bruno Alfieri, Francesco Vincitorio. In Ezio B. Caraceni’s work we can identify a first period of jokes that are part of a calligraphic abstractionism, and a second period (around the late years 50s) characterized by the use of burnt plastic on canvas. These are experiments and works that in the technical acquisition of melted plastic coated on canvas, anticipated the style of Burri himself. But the most convincing invention of Caraceni anticipating the artistic currents of the following decade is given by the construction of panels on which he introduces metal wire fixed on nails. These are artworks that play with the optic vision and land art for the spatial and mental relationships that intertwine. In the following maps which, as Maurizio Calvesi suggests, are labyrinth-like structures the threads freely and allusively analyse the way in which man is established in the territory, anticipating the artistic research for Poor art movement and ‘Gruppo zero’. At the end of his research with the geometric works of the 70s and 80s, the artist takes up the idea of ​​the continuous sign of his first production. Ezio B.Caraceni participates at three editions of the Biennale di Venezia (1956, 1958, 1968); at three editions of the Quadriennale di Roma and at one edition of the Tokyo Biennale. Among the solo exhibitions we mention ‘Bruno Caraceni’, Galleria Numero, Milano (1960), with a presentation by Bruno Munari and Bruno Alfieri; the two exhibitions at the gallery Il Cavallino in Venezia in 1960 and 1968 with presentation by Maurizio Calvesi; ‘Caraceni or the labyrinth’, curated by Maurizio Calvesi at the Galleria Arte Centro, in Milano (1969); ‘A Brevetti’ at the SM 13 gallery, Roma (1974); ‘Bruno Caraceni’ at the Palazzo Regazzoni – Flangini – Biglia di Sacile (2008); ‘Tribute to Caraceni, a removed pioneer of the twentieth century’, Municipality of Certaldo (2010). Caraceni is listed among the collective contemporary authors at Il Triangolo, Roma (1961); at the National Exhibition of Contemporary Art at Palazzo Strozzi, Firenze (1963); at the exhibition ‘Osservato da dentro’, Palazzo Reale, Milano (1968)