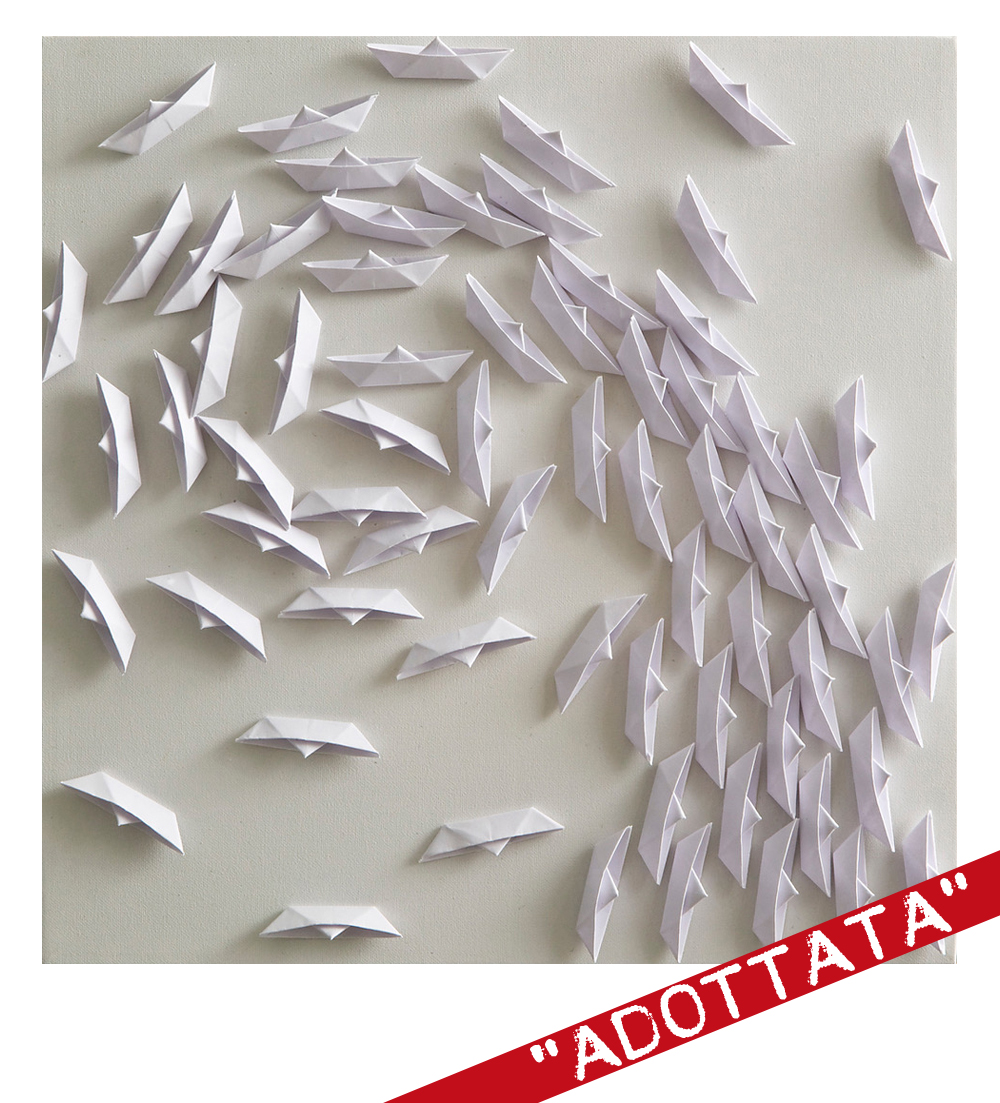 Riccardo Gusmaroli was born in Verona in 1963, now living and working in Milano. His photography studies and his long experience with ‘Studio Azzurro’ led him to found ‘Studio Acqua’ in 1984, and consolidating his activity as an architectural and still life photographer. Thanks to the intuition of the gallery owner Franco Toselli in 1991 he participated in the ‘Imprevisto’ exhibition dedicated to the most promising young artists and organized by Luciano Pistoi at the Castello di Volpaia, in Radda in Chianti. The following year he exhibits in a personal show at the galleria Toselli in Milano. The freedom with which he researches materials and surfaces to be used is theoretical assumption of his artistic experience: stamps, maps, playing cards, geographical cards, folded cards to create objects that chase each other on monochrome backgrounds following the rhythm of the soul and mind travels. The Sperone Gallery in New York and the Raffaelli Studio in Trento host Riccardo Gusmaroli respectively in 1993 and 1994 for two group exhibitions. In 1998 he takes part in a collective exhibition at the Cà di Frà Gallery in Milano with Damien Hirst, Konrad Klapheck, Tano Festa and Mauro Benetti. The new millennium inaugurates a fertile exhibition season, with solo shows at the Montrasio Gallery in Monza; Forni Gallery, Bologna; Simonis Studio, Paris; Tega Gallery, Milano: Ermanno Tedeschi, Torino.

In 2009, we mention the collective ‘Mappe’ in which he exhibited with Alighiero Boetti, Luciano Fabro, Piero Pizzi Cannella and Salvo at the Galerie Di Meo in Paris. In 2010 the Spazia Gallery in Bologna celebrates 30 years of exhibition activity with the personal ‘Derive’ curated by Valerio Dehò. In 2011 Riccardo Gusmaroli exposes to the personal ‘Così vicino, così lontano’ at the Galleria Glauco Cavaciuti, Milano. In 2015 he participates in the group ‘Rigorismo’ with Agostino Bonalumi, Dadamaino, Turi Simeti and Pino Pinelli at the UNIX Gallery, at the Italian Cultural Institute in New York and at ‘Frequenze parallele’, Galleria Glauco Cavaciuti, Milano. The 2017 personal exhibitions take place at the Armanda Gori Arte gallery in Pietrasanta and at the Bawer gallery in Hamburg.