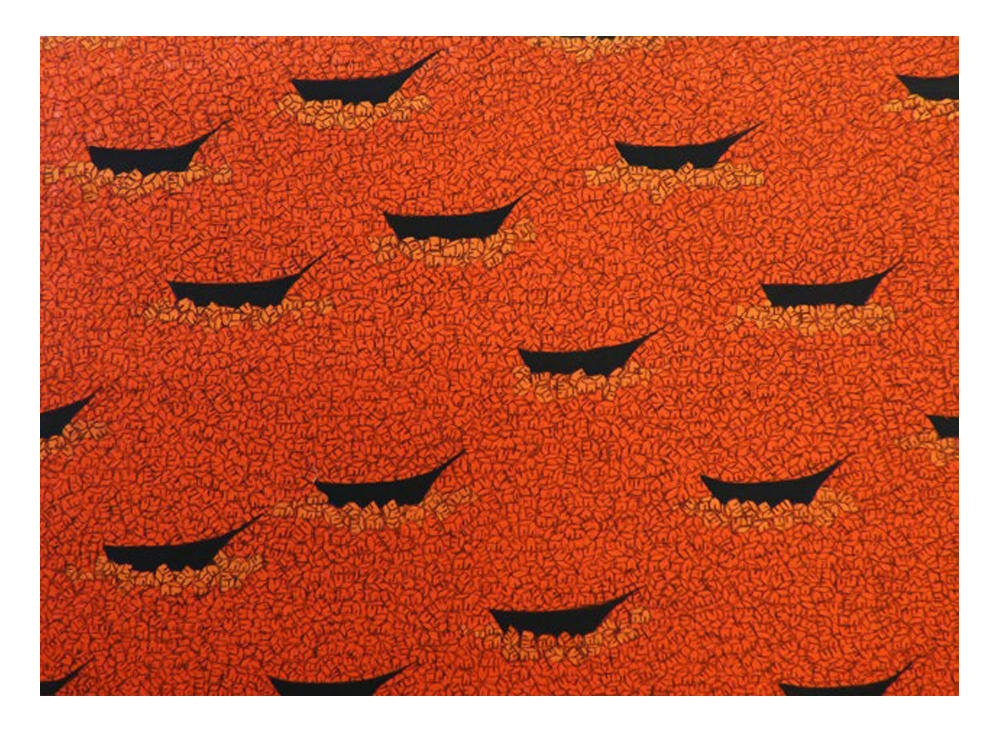 oil and pencil on canvas

Josè Demetrio Peña was born in 1971 in Dajabòn, Dominican Republic. In 1997 he graduated with full marks from the Academy of Fine Arts in Santo Domingo where he specialized in painting in 1999. Soon afterwards he accepted the professorship that he held until 2001. During his academic path he created together with other colleagues and friends the group ‘Sietemasuno’ and in 2004 with the artists Timoteo de la Paz and Rosalba Hernandez he signed the manifesto ‘Siete’ published in 2005 in the catalogue of his personal ‘Hay una Isla en el Mundo’ at the Bonioni Arte gallery. In 2004 he was invited to participate at the creation of the work ‘Whirls and Twirls 1’ that the American artist Sol Lewitt designed for the reading room of the Panizzi Library in Reggio Emilia. In 2006 with the Gallery 911 in La Spezia, he presented ‘Origins of the islands’; in 2008 ‘Mi mundo’ at Agorarte in Milan and in 2009 ‘Untitled’ at Bonioni Arte in Reggio Emilia. In 2001 in Santo Domingo he presented the solo show ‘El Ultimo Verde’ at the Laboratorio Evolutivo De Arte Contemporaneo and participated at the ‘Latin American art collective’ in the Bertrand Kass gallery in Innsbruck, Austria. In 2012 he inaugurated ‘Sognando quell’America’ at Forza Impresa, Reggio Emilia. In 2015 he was selected among the participants of the 28th Art Biennial of the Museum of Contemporary Art in Santo Domingo and in 2016 he participated in the collective ‘Presencia en la Isla’ at the Amicus Galeria in Santo Domingo. In 2017 he is in New York for the ‘Collective Fulguration’ at the space of the Cultural Committee of the Dominican Republic of the city.
In 2018, always on collective exhibition, he takes part in the exhibition ‘La mano hispana’ at the Milander Center Hialeah Florida organized by the Amicus Gallery as well as in ‘Insular Registry’ with the DO Artecontemporaneo Gallery in Santo Domingo. In 2019 he participates with Amicus Gallery at the Great Art Small Formats exhibition in West Palm Beach Miami. Josè Demetrio lives and works in Italy and Santo Domingo.