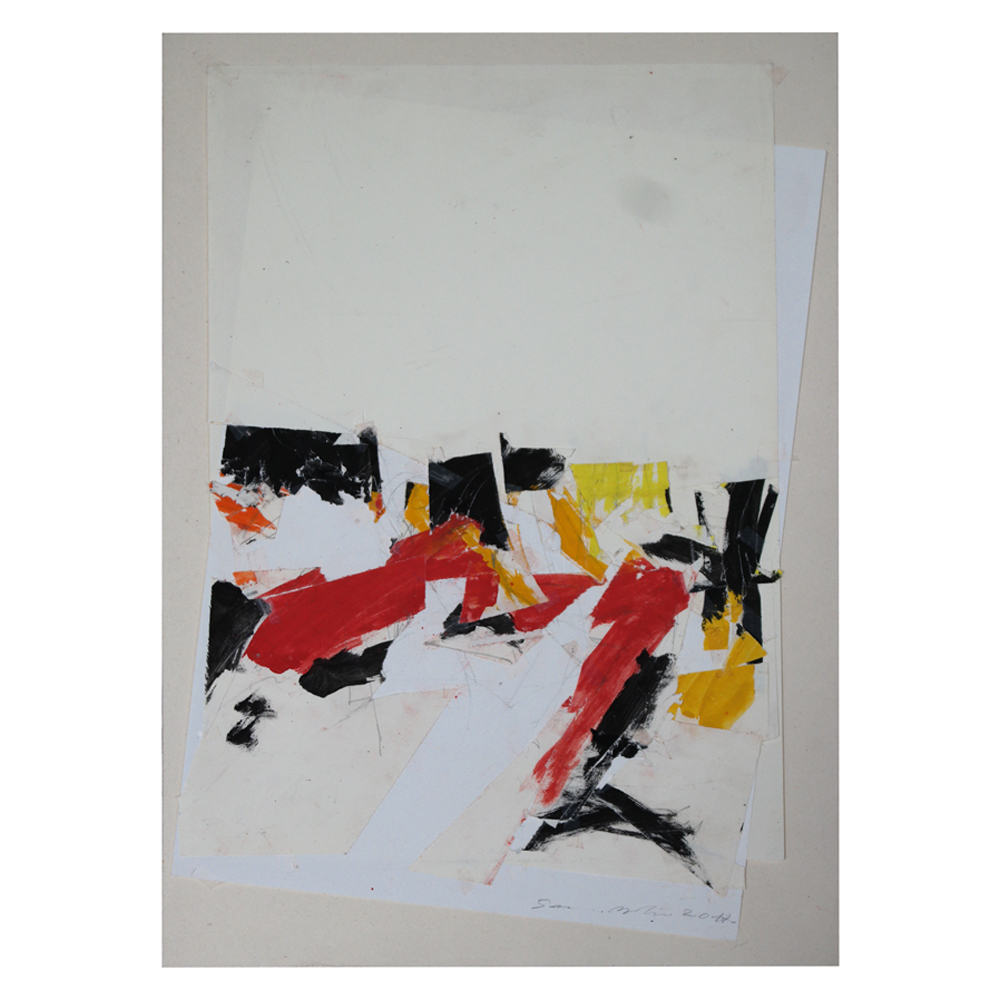 collage and mixed media on cardboard

Sandro Martini was born in Livorno in 1941. He lives and works between Milan, New York and San Francisco. He attended the Institute of Art of Lucca and Florence where he met, among others, Gino Marotta and Nicola Carrino. In his trips to Rome he become friend with Corrado Cagli and the most representative artists of the cultural scene of the city. Moved to Milan, Sandro Martini made his debut at the Galleria Le Ore in 1959, continuing his artistic career in Italy with the historic Il Milione gallery (from 1965 to 1974); the Marconi gallery (1976); the Galleria Blu (from 1975 to the latest exhibitions solo shows of 2012 and 2013).

In 1978 the Fine Arts Center of the University of Massachussets invited him for a personal exhibition and this experience marked the beginning of a long series of collaborations with the United States: for 25 years Sandro Martini has been teaching engraving and fresco techniques at the Kala Institute in Berkeley.

One of his installations of permanent canvases is part of the heritage of the Djerassi Foundation in Stanford and there are numerous installations promoted by the Public Art Found in Bryant Park, on 42nd Street, at the Citicorp Center and at PS1 in New York.

In Milano the artist has held the chair of engraving for years at the New Academy of Fine Arts. In Italy he creates important canvas installations at Palazzo Citterio, Milano (1981); at the Sala delle Grida, Borsa Valori di Milano (1983); in Piazzale Michelangelo, Firenze (1989). In 2004, four floors of stairs of the Casa della Carità in Milano have been occupied by the installation of canvases and glass.

The anthological exhibition at the PAC in Milano was held in 1993; in 2005 the one at the Bottini dell’Olio, Livorno (2005). Among the latest personal exhibitions are those at the Frankfurter Westend Galerie, Frankfurt am Main (2008); Castello del Valentino, Torino (2014); ‘Atuttosesto’, Casa del Mantegna, Mantova (2015); ‘L’Altrove nella pittura II’, PoliArt Contemporary, Milano (2016) and M.a.x Museum and Workshop Space, Chiasso (2018).